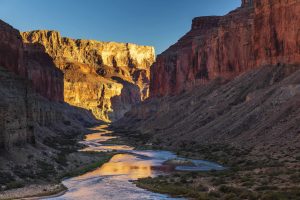 Water cuts made in Southwest due to drought on Colorado River

As drought seeps over the West and other parts of the country, water conservation in those areas is being encouraged and even enforced in some places. One of the greatest impact of the drought and water shortage can be seen on the Colorado River and its major reservoirs – Lake Mead and Lake Powell. According to CNN, due to the drying up and the overuse of the rivers, the federal government is implementing mandatory water cuts and requesting states to formulate plans to save the rivers. The federal government is executing water restriction rules which enforce that Arizona, Nevada and Mexico must further reduce their Colorado River use. Arizona is facing the largest water cuts: 21% of the state’s yearly allotment of river water.

As a community, there are ways we can work together and do our part to save water usage. At home laundry machines use around double the amount of water laundromat machines use per cycle. Laundromats also have washing machines and dryers that take heavier loads, allowing more clothing and heavier material in one round. In addition, the latest washers are high speed which makes them very efficient compared to home washers. By utilizing local laundromats washing machines, families can contribute to water conservation which is needed in many drought stricken areas of the country.