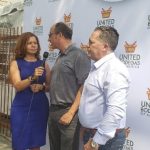 Eastern Funding continues to provide their financing to the many bodegas they have been serving and are committed to the many individual businesses in the industry.