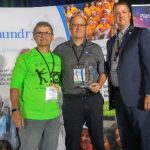 At this year’s Clean Show hosted in New Orleans the President of Eastern Funding, Michael Fanger was recognized by the Coin Laundry Association. Michael was awarded for his efforts in promoting sustainability initiatives in the laundry industry.

The award was given during the CLA awards ceremony at the 2019 Clean Show. It was one of several special awards the CLA gives out to outstanding figures who are active in the industry. The Sustainability Award was given to Michael for his efforts and role in promoting a greener and better laundry industry. It was presented to by Joel Jorgensen, CLA Chairman and Brian Grell, CLA Vice Chair.